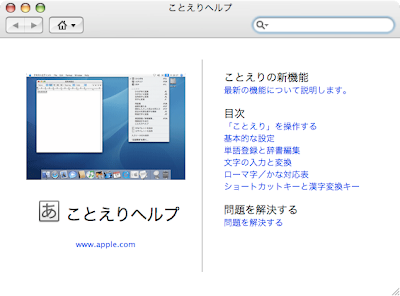 Joel Spolsky has just posted a comparison of the Apple and Microsoft approaches to screen rendering of type, in which he says if Apple is Target Microsoft would be Wal-Mart. Weeeeellllllll -- the problem is neither is remotely like Fog Creek. If Joel ran Apple I would know where to send my couple of hundred complaints about my Mac -- and Joel, who has written about how to achieve remarkable customer service, who has more recently written on debugging as a game of inches, would actually welcome the couple of hundred complaints, and act on them, and Apple bloody Apple would have a product accessible to the telepathically challenged.

About 6 months ago Apple clawed its way up from a 4.3% market share to a 4.7% market share!!!!!!!! Achieving 16% growth!!!!!!!!!!!!!!!!!!! Poor old Bill Gates would be hollow-eyed and popping Temazepam but for one little thing. All he has to do is look at what you get if you click on Kotoeri Help, seeking assistance with Japanese input, to know he is dealing with lunatics.

What you get if you click Kotoeri Help (yes, you have seen this before):

Now, not to be hasty, this is not userunfriendly. It's VERY friendly to Japanese users. It's friendly to users who are fluent in Japanese. And it's highly educational for beginners and improvers. They'll have to learn all the kanji eventually; why not start now? And it's always good to have a chance to practice the katakana -- as Katakana The Easy Way points out, students of Japanese often lag behind in their mastery of this important element of the written language.

(Would you have had the self-discipline to practice that if the Help facility had been in English? Steve Jobs knows best.)

Yes, Apple Kotoeri Help provides the novice with hours of innocent fun. And for those who want a blast from the past, there's also an online manual at the Apple website -- available for easy PDF download, it's the manual sold with the Japanese Language Kit back in 1997, when the JLK generated its very own income stream and that clinking clanking sound eased the pain of producing documentation. Now absolutely free, and you can have even more fun working out how the GUI has changed. Cheers, Apple!

Guy Deutscher (author of The Unfolding of Language) tried to persuade me last November that I could do anything in Windows that I could do on a Mac, I should switch to a PC, and he showed me how I could type Arabic in Windows and he made it look easy. So I did actually try out a Sony Vaio, but switching between languages really wasn't as easy as it is on a Mac, and now Mellel for OS X has a new release that includes all kinds of typographical tricks previously available only in Indesign and the like -- you can change a letter's fill, change the colour, weight and style of stroke, change the colour of background, raise/lower the baseline by tiny increments (and much much much much more), all this for $49 so I don't know why the glad tidings are not being shouted from the rooftops. You can do all those things on a PC if you don't mind paying $700 or so for Indesign or Illustrator, but you still wouldn't be able to do them in Arabic or Hebrew without spending even more on add-ons, and it's all just messy and unpleasant, and soon the Sony Vaio was a roach-infested horror despite all the virus protection I thought I had installed.

Somehow, over the last few weeks, I've become hypercritical. I'm always looking for flaws in things, and when I find them, I become single-minded about fixing them. It's a particular frame of mind, actually, that software developers get into when they're in the final debugging phase of a new product.

(The tragic irony of it all is that this particular frame of mind has been deployed on FogBugz, a debugging program for which I have no use, rather than on OS X, which I have no way of avoiding.) Fix-It:

Over the last few weeks, I've been writing all the documentation for the next big version of FogBugz. As I write things, I try them out, either to make sure they work the way I think they should, or to get screenshots. And every hour or so, bells go off. "Wait a minute! What just happened? That's not supposed to work like that!"

(The mention of the D-word, of course, is in itself enough to drive a Mac user to drink. Something tells me Spolsky's documentation offers little of the dry humour so familiar to the unhappy Macolyte:

Because the menus and preference settings for the JLK are in Japanese, it may be difficult for a non-Japanese speaker to identify the appropriate selections to make. The steps below will identify the appropriate selections with graphical clues that allow a non-Japanese speaker to correctly select the Kana Keyboard and thereby enable one-keystroke Katakana input.

-- a philosophy Apple thought good enough for its users in 1993 and has seen no reason to change in the last 14 years. (It's the use of the word 'may', of course, that's so delicious: non-Japanese-speaking telepaths will have no trouble at all.))

Well, enough of this rant. If Lisa the wheeler dealer could persuade Steve 'It Ain't Broke' Jobs to talk to Spolsky Apple could probably make a Great Leap Forward -- not the kind of GLF that takes a 4.7% market share up to a niche-dominating 5.2%, but the kind of GLF that would turn Apple from a plucky underdog to a serious contender for the nontelepathic dollar.

Meanwhile I have written a guide to inputting Japanese in Mellel, including more general assistance with using Japanese in OS X. Yours here.
Posted by Helen DeWitt at 7:03 AM

Sybil! Is it really you?